Lucky by All India Radio, is the viewable blood, sweat and tears of Australian based animation company ‘Dee Pee Studios’. It involves a painstaking animation technique, whereby the team paints in the air with glow sticks, frame after frame to create entire sequences of animation, usually taking a whole night to shoot. 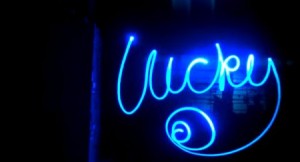 Three people’s lives suddenly become quite complicated, but will it ever end?

Two friends take to the streets in a stolen shopping trolley looking for adventure.

Basil pursues Mia. But Mia is only interested in men who are masculine.

Winston is a visual exploration of an individual searching for entrance back into their physical body.

After a night of thrills, grog and a stolen car, 16 year old Jesse is confronted with a life changing decision, following the arrest of his best mate Jamie. Jesse is torn between his girlfriend, Ellie, and her desire to protect him, and his loyalties towards Jamie. Should he let Jamie take the rap, or man up and take responsibility?

Gain an insight into the gut-wrenching, crippling condition that is cutting down middle-aged men in their prime.

What does a girl have to do to get a boy’s attention?  Minnie, 10, lives in an aboriginal fishing village. Junior, 10, lives there too. Little does he realize Minnie’s unrequited love will soon save his life!

A Man is interrogated by a mysterious, masked stranger about his true identity. When the truth is finally revealed, things start to get a little hectic

This Film is about the end and closure of Phantom actions from past experiences, the end of being alone and unwanted, it is the final nail in the coffin of Not being Recognised.

Angie’s life is divided in two.  She suffers from an identity crisis and its all because of her hair. Is Angie’s hair having all the fun? And if so, why, can’t she?

Ten years after his untimely death, thirty year-old man-child Jeremy Blyth receives a visitation from his mother.  She has been watching him form the spirit world and she’s not happy!

Following the tragic death of his daughter, Ewen leads south to confront his grief, and reconcile himself to her loss.

Tells the story of a lone surviving woman, stuck in the middle of nowhere surrounded by the undead, trying to hold on to the last of her humanity.

Experimental doc, on the changing face of Bulgaria.

A documentary on Hayley Jacobs a psychic medium who has given readings to thousands of people over the past 20 years.

This is a little music video in brickfilm-style for our song He Loves My Pies. This was initially thought to be a demo tune for the new ACE synthesizer…

Presents the plight of an abused women, by loosely incorporating the myth of “Lilith” the first Eve.

A man wakes on the side of a road in a city. In his hand is a red envelope addressed to Sally. His search for identity and self begins.

Henry is a 7 year old boy who is relentlessly physically and emotionally neglected by his parents. Twenty years later he commits a terrible crime and finds salvation in reliving the happiest memory from his childhood. A harrowing tale of blame and reason, this film examines how true monsters are formed and how the endless cycle of abuse continues.

When all the birds in the world disappear under mysterious circumstances, a lonely woman takes her aviary obsessed boyfriend on a picnic only to find that the birds are back, zombified, and looking for revenge.